THE FALLEN BELTON HEROES OF WW1

Excerpt from Belton at War 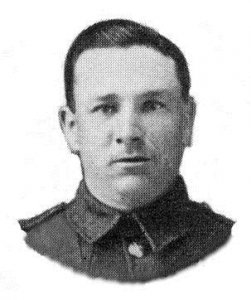 bb was born on 1st October 1887 at the Smithy in Belton situated between the Black Horse Inn and Netherfield Farm. He was one of eight children of John Webb, the village blacksmith and his wife Emily. Abram spent his childhood in Belton and on leaving school was apprenticed as a farrier to carry on his father’s and grandfather’s trade. But for reasons unknown, he left the village in 1906 and at the age of 19 years enlisted in the King’s Royal Rifles. He was killed by a piece of shell on July 19th 1916 during the Battle of the Somme while waiting to go forward with his men 2 miles from Fricourt. His grave lies in the London Cemetery and Extension, Longueval, Northern France.
Abram kept a diary of his time in the trenches – probably against Army regulations. Much of it was destroyed, but a good section from 1915 survived and can be found in full in Belton at War (click here for details). Excerpts of the diary has also been published on line – click here to view Life in the Trenches.

ottages on May 6th 1896.
He was the youngest son of George and Annie Camm, née Otley. Prior to joining the army, he worked in gentleman’s service at the Vicarage, Sibbertoft, Northamptonshire and then Ogston Hall, Alfreton, Derbyshire. On November 23rd 1914, he enlisted in the 5th Middlesex Regiment and was sent to Mill Hill and then to the Lower Chatham Barracks at Chatham. On March 10th 1915, Private Philip Otley Camm took part in the Battle of Neuve Chapelle and died from a gunshot wound to the head at the age of 18 years on the 30th of the same month at No 11, General Hospital, Boulogne. He lies in the Boulogne Eastern Cemetery which contains 5577 Commonwealth graves from WW1.
Philip wrote a series of letters home which are published in Belton at War.

PRIVATE CHARLES WILLIAM BETTS (1888 – 1917) Private Charles William Betts was born in Belton on July 12th 1888 and was the son of Charles and Sarah Betts. He moved to Dalwhinnie, Invernesshire and worked as a postman. Prior to his enlistment he was rejected three times, but was finally accepted into the army on October 20th 1916 for garrison duty abroad. He joined the 2/4th Cameron Highlanders and left for France on June 29th 1917. He was reported missing just over a month later on July 31st 1917 when a Battalion of Cameron Highlanders attacked a trench and strong point on the old German front line on the Ypres-Roulers Road. Private Charles William Betts has no known grave but his name is commemorated on the Menin Gate in Ypres. At the time of his death, he was 29 years old.

brothers who served in WW1. He was the son of Fred and Eliza Browett and was born on April 24th 1890 in the thatched house, now demolished, which stood at the north end of Littleworth Lane, Belton. He was employed as a horseman before joining the army on February 23rd 1910. He was a gunner in the Royal Garrison Artillery operating heavy artillery guns. On March 3rd 1911, he went on foreign service to India and took part in the quelling of the rising in Peshawar. From India he was transferred to Salonica, Greece and served there until his death from pneumonia following malaria. He died on October 9th 1918 and is buried in the Mikra Cemetery, on the west shore of the Gulf of Salonica, at Kalamaria, Greece.  He was aged 28 years.

PRIVATE WILLIAM JAMES CLARKE (1881 – 1917) Private William James Clarke was the eldest child of William and Mary Ann Clarke of 5, Chapel Street, one of two master bakers in Belton at that time. He was born on March 15th 1881 and was a carpenter before entering the army on November 8th 1916. He joined the 8th Leicestershire Regiment and was transferred to the 1/4th battalion. He travelled to France on January 13th 1917 and on April 22nd 1917 was killed by a sniper’s bullet. He left a wife, Kate Annie Clarke and two children, living in “Homeleigh,” Main Street.  He has no known grave but his name is commemorated on the Arras Memorial at Faubourg d’Amiens Cemetery. He was 36 years old.

Private Charles Edward Reeve was born in Belton on December 7th 1889 eldest son of Francis and Mary Reeve. He was an ironstone worker at Corby before enlisting in the Coldstream Guards in November 1916. He went to France in October 1917 and on November 30th the same year met his death at Cambrai. He has no known grave but his name is commemorated on the Cambrai Memorial at Louverval. He was 28 years old.

Frederick Robinson was the son of Mr and Mrs John Robinson of Belton although he was born on May 5th 1884 in Bedfordshire. He enlisted in the 6th Battalion Leicestershire Regiment on September 18th 1914 and went to France on July 29th 1915. He was a good athlete having won an eight mile cross country championship and was first in a championship race in France. He acted as a runner and observer to officers and took part in the Battle of the Somme.  He was killed by a shell at Fricourt Wood on July 17th 1916. He has no known grave but is recorded on the Thiepval Memorial which names over 72,000 soldiers also with no known grave. He was 32 years of age.