Belton at War is the fourth journal published by the Belton in Rutland History Society. 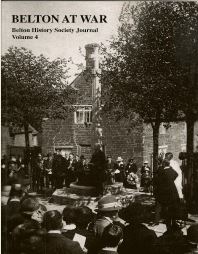 It focuses on the impact that war has had on Belton in Rutland and looks in detail at some of the individuals who were involved.

There are 23 pages featuring The Great War – or World War 1 as it later became known – with features, pictures and articles about the men from the village who died in the war and also the memories of some of those who returned. We’ve published some excerpts from Belton At War:

We’ve also teamed up with Rutland Remembers (http://www.rutlandremembers.org/) which is due to launch on 15th May and gives details the men from Rutland who served in the war.

Journals are available for sale via the Belton In Rutland  History website beltoninrutlandhistory.org

Contents of Belton at War